Valery Tsepkalo, Director of Belarus Hi-Tech Park, announced HTP financial and operating results for 2016 during a press conference on February 22. He pointed out HTP priorities for 2017 and answered reporters’ questions. 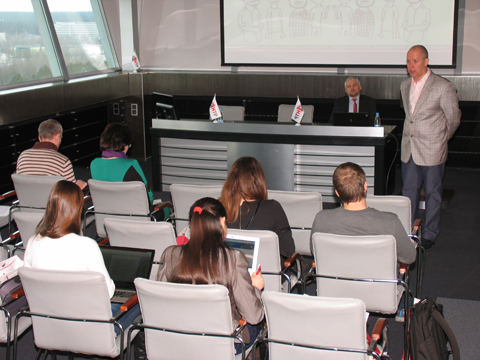 In 2016, the Hi-Tech Park continued its steady growth and accomplished its tasks on increasing IT services exports, implementing advanced IT projects in Belarusian enterprises, and attracting foreign investment.

In 2016, the exports increased by 16 percent, received foreign direct investment grew by 16 percent, and the number of IT projects implemented for the Belarusian market rose by 56 percent.

Production and sales revenue of the HTP resident-companies amounted to BYN 1,790.2 million in 2016, the growth rate over 2015 being 142 percent, or 119 percent – with due account of the deflator and USD exchange rate changes.

Software and IT Services Exports

In 2016, HTP exports of software and IT services increased by 16 percent and reached USD 820.6 million. The share of exports in the HTP total production came to 91 percent.

HTP resident-companies delivered their services to customers from 67 countries in 2016. 49.1 percent of the exports accounts for Western Europe, and 43.2 percent –for the USA. The share of the CIS countries decreased from 10.7 percent to 5.3 percent as the exports to Russia fell by 43 percent.

Table 1. Computer Services Exports. Balance of Payments by the National Bank of the Republic of Belarus.

In 2016, the Hi-Tech Park attracted USD 169.2 million of foreign direct investment which exceeds the FDI received in 2015 by 16 percent.

By the type of investment, 74 HTP resident-companies were established by Belarusian investors, 32 are joint companies, and 59 residents were set up by foreign investors.

In 2016, the Hi-Tech Park continued building the innovation ecosystem to encourage entrepreneurship and startup development in the hi-tech fields.

An investment project in Grodno was completed in 2016. The Hi-Tech Park invested over BYN 7 million (with due account of the redenomination) in the reconstruction of a building complex of 1,500 sq. meters.

The project allowed creating an innovation complex with a business incubator, coworking space and an educational center. A Grodno Region Development Department of HTP started its work there. One of the tasks of the department is to support ICT startup companies in Grodno and Grodno region. Grodno was selected as there are IT education providers – Yanka Kupala State University of Grodno, and the largest number of HTP residents and their offices located in the city.

Startup companies rented offices at lower rates, received advice on commercialization of their products and assistance in search for partners and investors.

9 startups resided in the HTP business incubator in 2016, with four of them being set up by graduates of the innovation and entrepreneurship course.

One of the priority objectives of the Hi-Tech Park is to encourage school students' interest in engineering, computer science and other technical disciplines and promote technical education among them.

In 2016, the Hi-Tech Park initiated an educational project on developing educational programs in programming in Scratch for school students from Grade 2. The project was supported by the Ministry of Education of the Republic of Belarus and successfully launched.

In April 2016, the IT academy for kids "Compass" was opened in Orsha. Compass became the fourth regional IT academy opened with the support of the HTP resident-companies after NOTA and RITM in Novopolotsk (in 2010 and in 2013 correspondingly), and Steps in Lida (in 2014). The academy in Orsha is intended to help kids and school students learn programming as well as teach school teachers how to program in Scratch.

During open days in HTP over 4,000 high school students visited offices of HTP companies in 2016 where they met with software engineers and other IT specialists, learned about IT professions, and received advice how to build a successful career in the IT industry.

Throughout 2016, HTP resident-companies provided support in organizing and financing different international competitions and national contests in mathematics, physics, and computer science for school and university students.

Send to a friend

Regulations on activities with tokens approved

The Supervisory Council of the Hi-Tech Park approved the Regulations on token-related activities. More

Who can become HTP residents?

How to become HTP resident?